Shocking Revelation from a General: the Demise of Oplan Cronus (con't.) 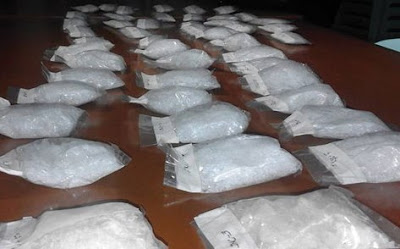 “Agaw Bato” is an illicit activity of police officers under the guise of a legitimate anti-drug operation. This activity is a pseudo police operation wherein the operatives will file a pre-operational report with the Philippine Drug Enforcement Agency (PDEA). Upon apprehension of their subject and seized of drugs, they directly proceed to their safehouse. The subjects were usually Chinese drug traffickers or big-time local drug traffickers. If they are flagged down along the way by other law enforcement agencies, they will prove the legitimacy of the operation by presenting the necessary documents they prepared. And if the trip to the safehouse is without a flaw, they will divide the drug loot and recycle it to the market, disposing it in “fastbreak” as what the general coined it.


In some instances of these sham raids, still with pre-operational requisites, the operatives often misdeclared the real quantity of seized drugs, divide among them the undeclared portion and recycled it in “fastbreak” plus have the apprehended drug trafficker, specifically Chinese nationals, ransomed and replaced by another Chinese national. This is to erase any trace that there were apprehended drug personalities being released in exchange of hefty cash.

By March of 2014, Gen.Magalong and his office enforced a search warrant against the CIDG office of Pampanga and in the course of the raid, arrested the provincial chief of CIDG along with six civilian agents for alleged trafficking of illegal drugs previously seized during police operations.

The furtive activity of “Agaw Bato” leads to CIDG’s discovery of rampant drug trade inside the National Bilibid Prison (NBP), Director Benjamin Magalong (CIDG Chief) revealed that some PNP operatives were recycling seized illegal drugs and had links with some inmates.

His team presented their findings to then Secretary of Justice (SOJ) Laila De Lima. He also suggested in carrying out operations at the NBP. Soon after, a series of high level meetings and discreet planning sessions followed. These were attended by former SOJ Laila De Lima, Dir.Magalong, former PDEA Chief Arturo Cacdac, former NBI Director Virgilio Mendez, the Intelligence Service of the Armed Forces of the Philippines (ISAFP) and heads of various law enforcement agencies.

Initially, they deliberately excluded in the meeting the Bureau of Corrections (BUCOR), the agency overseeing the NBP. Eventually, they open the plan to BUCOR chief General Franklin Bucayo. Magalong was surprised when the BUCOR chief allegedly opposed the planned raid. The CIDG chief even recalls that one time, Bucayo together with the Presidential Anti-Organize Crime Commission executive director Gen.Reginald Villasanta visited his office and asked him not to proceed with the operation. Magalong quoted Bucayo, “Benji, kung pwede wag mong e re-raid ‘yong NBP (Benjie, do not raid the NBP)”. Bucayo further said to Magalong, “Benji, mamatay ako. Delikado ako diyan.” Despite Bucayo’s repeated attempts to stop the raid, the CIDG came up with “Operation Cronus” on October of 2014, which was the basis of the raid.


The NBP is divided into a quadrant wherein two sides are composed of the Carcel side (Visayas and Mindanao inmates) and the Presidio side (Luzon inmates). Carcel’s drug trade was allegedly control by Herbert Colanggo and the Presidio trade was under Jaybee Sebastian.

The plan was for the CIDG and NCR-PO to raid the Carcel side whilst the PDEA and NBI to operate at the Presidio side. But what transpire surprised Magalong and his team: the NBI, NCR-PO and BUCOR raided the NBP on December of 2014; another team raided the NBP. The CIDG, who conceptualized the operation, were left behind. On the other hand, the PDEA was informed only on the day the raid was carried out, with only their K9 as participants.

After the allegedly sham raid, 19 high profile inmates were transferred to the NBI Detention Center. Magalong later found out that De Lima, Bucayo, Villasanta and General Marcelino Garbo, then PNP Deputy Director General were the once who planned the December raid. Garbo was one of the five generals named earlier by Pres.Rodrigo Duterte as drug protector.

Many speculate that Sebastian was spared from the raid in order to monopolize the alleged billion peso drug trade at the NBP. The national penitentiary was the "drug trade center of the Philippines" during the term of Senator Leila de Lima as secretary of the Department of Justice (DOJ), an inmate told lawmakers at a hearing on Tuesday as reported by GMA Network.


De Lima and Bucayo are implicated in the proliferation of illegal drug trade at the NBP. Cong.Rodolfo Farinas said during the inquiry in the House of Representatives, “If I look at the affidavits of the witnesses here, yong timeline nag sasabay eh.”

Justice Secretary Vitaliano Aguirre has asked Magalong and other officers involved in “Operation Cronus” to submit their affidavit as evidence against De Lima and other erring officials.