DISRESPECTFUL!!! Carlos Celdran mocks the Sto.Niño, Duterte and His Voters

Carlos Celdran, coined the term “Dutertards” (a combination of "Duterte" and the derogatory “retard”)on President Rodrigo Duterte's supporters. Prior to the 2016 election, he lashed out against the supporters and called them "delusional and lazy."


Recently, this buffoon's antics were getting utterly offensive and disrespectful. He called all those who voted for Duterte "Morons" and what's worst, he mocked the Sto.Niño when he posted "Pwet Señor" on Facebook.

This blatant extrovert, who is also a tour guide, was once found guilty by a Manila court for offending religious feelings when, dressed like Jose Rizal, stood in front of the main altar of Manila Cathedral during an ecumenical service, shouted and raised a placard with the word “Damaso” on it.

Many Filipinos, especially Sto.Niño devotees and Digong supporters, were miffed and offended by his mockery. One Sto.Niño devotee and a Duterte voter, wrote a compelling open letter to Mr.Celdran. 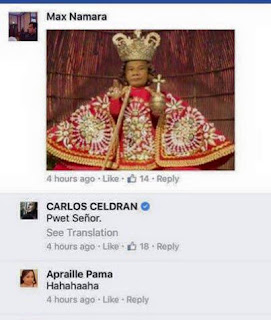 I am writing this letter not to bicker but rather to engage in a healthy discussion with a fellow Filipino.

I understand people often differ in opinion when it comes to politics but there is always a common denominator, and that is, WE ALL WANT WHAT IS BEST FOR OUR COUNTRY.

On that note, I noticed you have been very vocal of your displeasure & hatred for our newly elected president even before he won the Presidency. I find this absurd & unfair. If you really WANT WHAT'S BEST FOR OUR COUNTRY, then you should respect the "majority of the electorate" who voted for President Duterte. After all, this is what democracy is all about.

I agree with your stance on extra judicial killings because I think this is merely a "band aid" fix to the problem. I also agree with you that "violence begets violence" & that innocent lives are usually caught in the crossfires of this war against drugs.

However, I don’t agree with you that the 38% who voted for President Duterte are "MORONS". We voted based on our conscience & knowledge of all the presidentiables. Just because we voted for a President who is unorthodox & tactless when it comes to speaking in front of the media, it doesn’t mean we are "MORONS". With all due respect, you don’t have monopoly of knowledge, Sir.

Furthermore, I don’t agree that our President is a "MAD MAN" or a "MONSTER". He may suck at using respectful & appropriate language in his interviews...He may have an extremely unpopular method of dealing with criminality but at the end of the day, he is still a fellow creation of God & a fellow Filipino.

Finally, I am offended by your recent comment on an edited picture of Senor Sto. Nino. When you said "PWET SEÑOR" you didn’t only insult the president but all the devoted CEBUANOS who look up to this holy figure.

Now that I've said my piece & now that you've mentioned "PWET", let me just ask you, how would you feel if somebody calls you (pls. excuse my French) Mr. Carlos CeldrASS?

Celdran's comment on Facebook, along with the blasphemous edited image posted by a certain Max Namara, is extremely insulting and disrespectful, with no regards for decency.

The duo's profanity deserves no respect. Celdran's words and Namara's deeds infuriated more than the 38% who voted for Duterte. Devotees and most Catholics, the predominant religion of the Philippines, are disturbed by this.

One Cebuano's reprisal on Facebook: "Maybe we could petition these two assholes to be declared Persona Non Grata in Cebu?"